<- Back to all webinars

Clarivate Continued Developments within the Web of Science 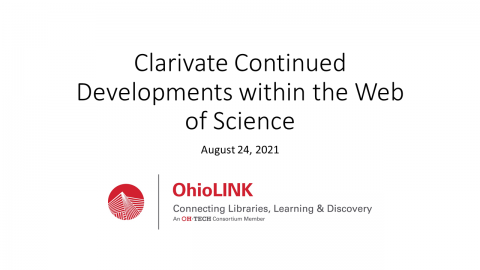 A vendor presentation from Clarivate on the New Web of Science interface with a refreshed look, enhanced workflow tools, and faster page load.

Don Sechler [01:01:23] "So are you going to bring subjects to web of science, not just InCites?" So yes, that that is part of the citation topics that we are bringing into the Web of Science. So, again, we have those citation topics that are kind of more granular subject categories, kind of groupings of articles around a given topic that are much more much more direct and applied to the topic of the paper, rather than just that broad subject category that you get at the journal level. So, yeah, that is something we'll be bringing to the Web of Science. I believe we should have those in Q4 of this year. Those are already kind of in our data. We're just kind of bringing them in in a way that's displayed and searchable in the web of science core collection. "Will this topic be a controlled vocabulary?" So they're not a thesaurus, they are a the vocabulary is kind of built by the algorithm that kind of creates those topics. So it's there is some management of a vocabulary, but it's not a it's not a hierarchical. There is a small hierarchy to this thesaurus. I take it back, but it's not a traditional controlled vocabulary like a mesh heading or a biosis concept code. So the vocabulary does change due to the algorithm, basically what's yeah, what's available, and, yeah, soon the management, that is something that one of the things that is been a part of this is they've tried to make these categories distinct, so you're not getting a lot of overlap between categories. So that's something that they're trying to manage in the algorithm. There's always going to be some things that are, you know, that there is overlap that can't be managed, but there is something for they're trying to keep kind of topics as distinct. We'll be when these things come to the Web of Science to get a lot more information about them, because they're you know, they're in a very kind of managed environment and the kind of very managed way in InCites, but start bring them to Web of Sciences and that kind of open and searchable and maybe cross-linkable and will have to be a lot more explanation about how they're actually functioning. So we will be adding a lot of details around those those kind of new subcategories schema when we when we do introduce this into the product. Yeah, so one of the things Michael just reminded me of is there is a some changes to merging source in citation index that are planned this year. So a merging source in citation index up to this point has been a it's a file that kind of lives alongside the Web of Science's core collection and includes journals that have met are our criteria for conclusion on quality, but not on citation impact. That file will be turning into a five year rolling file at the beginning of 2022. So right now, it includes it's a kind of a growing file from 2015 forward. But it we're transitioning that into a rolling five year file because it's gotten very large, actually, and the inclusion of a number of journals in that file. Backfiles of the file are a can be purchased and a purchase of that backfile does kind of transition the file into a fully growing file. So if somebody invests in the backfile or has invested in the backfile, then they file just continues to grow as long as you maintain a web of science subscription. But if you haven't invested in the backfile, then that emerging source of citation index front file will be kind of changing into a five year rolling file at the beginning of the new year. That file is if you haven't purchased the backfile, the front file is entirely gradus with the maintenance of a Web of science core collection subscription. So there's no investment in the additional investment to maintain that Web of Science or front file, its just the backfile that is an ongoing investment. I know we've gone way over time, I'm thankful for everyone's patience here, lots a lot to talk about, a lot of new things coming.

April Levy [01:05:50] Well, thank you very much, Don, and thank you, Michelle and Michael. We appreciate getting this very detailed and thorough update. And as mentioned earlier, we have recorded the session, so we're going to make that available to our members as well.

Michael Bragg [01:06:09] And we can provide you a copy of the deck that was used, so you can include that with the the recording for anybody that wants to revisit this or share with colleagues that were unable to attend or if you have any questions afterwards, you can always reach out to us. We're happy to field any inquiries that you have and keep those lines of communication open.